Founded in Rome in September 1946 as a state-owned company, in the first decades of its activity Alitalia experienced a flourishing development that led it to become the third European airline in 1993.

However, when the air market underwent the liberalization process initiated in ’78 by the USA which led to the advent of privatized low cost airlines, Alitalia, still completely state-owned, had to face its first economic crisis.

Thus, in 1996, an industrial plan was launched which aimed to stimulate international alliances and which had the privatization of the company as its main objective.

Several alliances were formed right from the start, but the actual privatization of Alitalia took place only in 2008, when the CAI bought the assets of the company; Alitalia-CAI pursued a policy based on short-haul flights, and initially managed to obtain good results.

However, in 2012 the situation worsened again with the worsening of the world crisis: and to remedy the umpteenth difficult situation, Alitalia signed an agreement with Etihad Airways in 2014. It soon became clear that not even the entry of the Emirates had managed to revive the fortunes of the company, so much so that in 2016 it fell into a further economic crisis.

In an attempt to collaborate with the trade unions, a pre-agreement was reached in April 2017 which provided for, among other things, a reduction in the redundancy of personnel at an indeterminate cost, the use of layoffs by May 2017, the activation of active labor policy programs, with retraining and training of personnel and measures aimed at improving the productivity and efficiency of the company.

Before being effective, the aforementioned pre-agreement was submitted to the workers’ vote by referendum. The results were overwhelming: a net 67% of votes against against 33% of votes in favor.

The Shareholders’ Meeting then asked and obtained from the MiSE (Ministry of Economic Development) the admission of an extraordinary administration: an attempt was made to reach a point of equilibrium by keeping open several hypotheses, among which that of selling Alitalia proved to be the most appropriate . In fact, the endless series of extensions and negotiations with the various buyers (including Lufthansa, Fs, Delta Airlaines and Atlantia) has continued since 2017 without yet reaching a point.

The reasons for Alitalia’s economic instability must undoubtedly be sought in a management that is not always able to better evaluate the different situations, which has often incurred out-of-control costs (including maintenance, leasing costs and those relating to the change of computer system wanted by Ethiad), and which instead reduced labor costs, much less influential on the company’s income.

Furthermore, Alitalia is still subjected to competition from both networks and low cost carriers, continuing to not have a well-defined business model. It is obvious that this implies various problems regarding the management of the company: on the one hand, we try to guarantee the structure, services and quality typical of a network company, but on the other we act from an organizational point of view as a company. low cost, focusing on short and medium-haul routes, as well as on lowering costs.

Alitalia’s future is still uncertain, and the further extension of 21.11.2019 is proof of this: buyers are not yet able to formalize offers that can actually save the company; therefore, either there will be an effective implication in the coming months with the formation of a consortium (which perhaps sees Atlantia and Fs among the protagonists), or we will wait again, in the hope that other potential buyers will present a convincing offer.

In fact, Alitalia is not selling out!

Associate in the Consulting Area trial 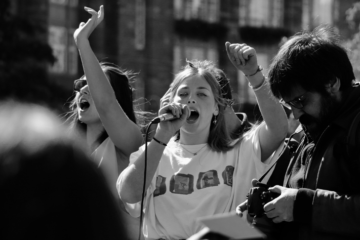 National and world movements, protests and marches are the elements that now characterize the 21st century. Most of these events arise from the resourcefulness of the young people of Generation Z: a ​​generation often criticized, Read more…